What is Island Hopping?
Island hopping is crossing the sea by a series of short journeys between islands. If you are a rookie in Island Hopping, then the Aegean Sea is the ideal place to begin with. Nearly 227 habited islands, dispersed all over the Aegaean basin, will offer you amazing experiences and intense feelings to equip your spirit with.

The diverse hellenic endocultural background that comprizes each island, creates a unique canvas of  architechtural, culinary and natural diversity.

Did you know that Egypts name derives from the word Aegean Sea? In Greek the word Aegypt (Aegean + yptios) literary means “Lying under the Aegean”

Pack your bags only with the essential as you will find everything you need in the places that you will visit.
Setting off from Piraeus Port, the largest port in the Eastern Mediterranean, where you can visit the local market and the astonishing museums of Piraeus Municipality. Your first destination will be the island of Santorini. Embarkation on the ferry starts 1 hour before departure and the journey lasts approximately 7 hours or 5 hours with a speed boat.
Spend the first 2 nights in a picturesque hotel in Santorini near the most beautiful sightseeings, the hop on to the next destination Naxos where you will stay over 2 nights.
Next hop is the famous for its nightlife and wondeful beaches island of Myconos, on which you will stay 2 nights to enjoy the Myconean beauties.

Ferry Departures are choosen to be suited to the provided check out times and perfectly synchrosnized with boat schedules.

Embarkation 1 hour before ferry departure on each destination.

Detailed schedule will be available upon request.

If you wish we will meet at our agency in Piraeus Port.

Ferries depart at: 07.25 am or afternoon 17.30. It is recommended to choose to depart early as you will enjoy the day time cruise. Before you reach Santorini, the ferry stops over 3 more islands Paros, Naxos and Ios.

First and most important hop in Santorini for 2 nights.

Undoubtedly the most extraordinary island in the Aegean, crescent-shape Santorini remains a mandatory stop on the Cycladic tourist route—even if it’s necessary to enjoy the sensational sunsets from Ia, the fascinating excavations, and the dazzling white towns with a million other travelers. Called Kállisti (the “Loveliest”) when first settled, the island has now reverted to its subsequent name of Thira, after the 9th-century BC Dorian colonizer Thiras. The place is better known, however, these days—outside Greece, that is—as Santorini, a name derived from its patroness, St. Irene of Thessaloniki, the Byzantine empress who restored icons to Orthodoxy and died in 802.

Walkers, nature lovers, and devotees of classical and Byzantine Greece would do better to come in spring and fall, ideally in late April through June or September through October, when temperatures are lower and the islands are less tourist-riddled. In late March the islands begin to burst with thousands of varieties of wildflowers, and sprightly crimson poppies dapple stern marble blocks; the sea begins to warm up for comfortable swimming in late May. Autumn’s days are shorter, but the sea remains alluringly swimmable well into October. Autumn travel to the islands also brings rustic pleasures: grapes are pressed in September, and zesty olives are gathered and fields plowed in October.

Centrally located in the Cyclades, Naxos is a convenient spot for Greek island hopping. In summer, there are many daily ferries from the ports of Piraeus or Rafina in Athens to Naxos, giving thus the opportunity for many Greek island hopping packages from Naxos. Paros, Santorini and Mykonos are the top Greek destinations that you can visit by ferry from Naxos. As the distance is short between these islands, the trip is quick and easy. From Naxos you can also visit many alternative islands that are not so popular, such as Koufonisia, Amorgos, Donoussa, Schinoussa and more.

Things you can do.

Famous for its minimal Cycladic architecture, Mykonos is full of traditional whitewashed houses and blue-domed churches. The trademark of the island, though, is the beautiful traditional windmills in front of Little Venice, where you can also enjoy the magical sunset and capture the colorful light washing up the island’s Chora (main town). Pure bliss!

Located in the center of the Cyclades island group, Mykonos is one of the most famous Greek islands for its cosmopolitan atmosphere and vivid nightlife! No wonder why it’s widely known as the “Ibiza of Greece”! Mykonos holiday is an experience of a lifetime and there’s a whole heap of amazing things to do in Mykonos. Marvel the amazing sunset from Little Venice Mykonos, stroll around the narrow paved streets of Chora, enjoy your stay at the luxurious Mykonos hotels, dance the day away at epic beach parties and swim at the exotic Mykonos beaches. When the sun goes down, join the nightlife scene of the island and party all night long at the legendary Mykonos clubs!
What’s more, Mykonos is the most popular gay-friendly destination in Greece. The island welcomes every year many LGBTQ tourists, who choose Mykonos for their holidays! 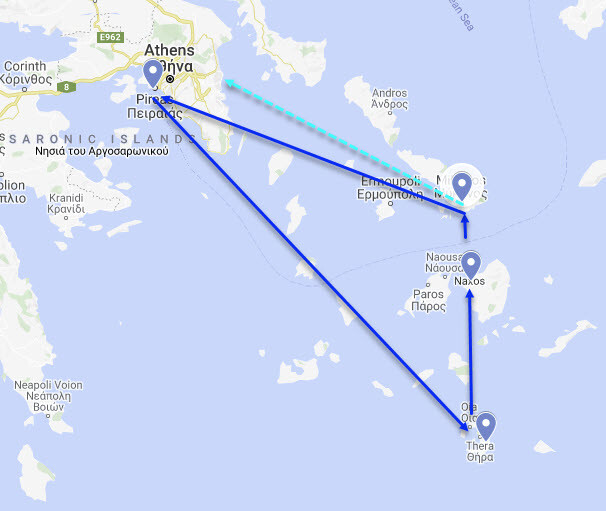 
Click for an appointment with one of our agents, to talk about your trip!

Call us
Call us for further info.

This website uses cookies to improve your experience while you navigate through the website. Out of these, the cookies that are categorized as necessary are stored on your browser as they are essential for the working of basic functionalities of the website. We also use third-party cookies that help us analyze and understand how you use this website. These cookies will be stored in your browser only with your consent. You also have the option to opt-out of these cookies. But opting out of some of these cookies may affect your browsing experience.
SAVE & ACCEPT
Powered by